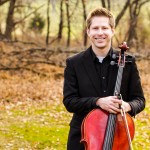 Tim Thulson is a cellist from Alexandria, VA, performing frequently in chamber, solo, and orchestral contexts both near home and abroad.

Mr. Thulson is a core member of, and serves as principal cello for, the Ars Nova Chamber Orchestra, Washington, DC's unconducted orchestra. In this capacity, Mr. Thulson has presented both orchestral programs and a wide variety of small-ensemble chamber works. Chamber music is an area that is particularly meaningful for Mr. Thulson, and Ars Nova provides an excellent platform for both the performance of established chamber repertoire and for the innovative application of chamber techniques within the full orchestra.

Mr. Thulson serves as cellist for the contemporary classical-focused Great Noise Ensemble. Concerts include Louis Andriessen's "La Commedia" for the National Gallery of Art, a performance that the New York Times called "first-rate" and "one hell of a ride."

Mr. Thulson has held board seats for the Ars Nova Chamber Orchestra and the Arlington Philharmonic, and he maintains a private teaching practice in Alexandria with his wife, violinist Mary Thulson. As a coach and adjudicant, Mr. Thulson has worked with organizations including the American Youth Philharmonic Orchestras, the Arlington Philharmonic's Crescendo Youth Chamber Music program, the Rockville Competition for Piano and Strings, Arlington and Alexandria Public Schools, and the McLean School of Potomac, MD.